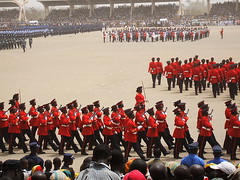 Ghana, the first sub-Saharan African country to gain independence, was 50, on 6th March 2007. Although the celebration of the west African nation is year-long, the climax was on Independence Day, when a national parade of Ghana’s Armed Force was held at the Independence Square in Accra.

Ramblings of an African Geek, a blog run by a Ghanaian, shares some high points of last week’s celebration in a blog entry titled: “The Flag is still flyingâ€¦â€¦â€¦â€¦â€¦”

Ghana turned 50 on Tuesday and a host of foreign dignitaries showed up to help us celebrate our position as the first sub-saharan country to be given permission to run our own affairs.

More interesting to me than the official celebration though, was the public response to the event.

Accra and Tema have been covered in flags for a couple of weeks now.

There have been brisk sales of flags and Ghana themed memorabilia.

Just about every car, taxis included, is flying the flag. Literally the city has been awash with red, gold green and black. Even more so than when Ghana was starting to dominate teams who were expected to murder us in the World Cup.

On independence day people showed up at the square to get seats early in the morning. Reportedly by 4:30 A.M it was impossible to find a seat even if youâ€™d paid for one. 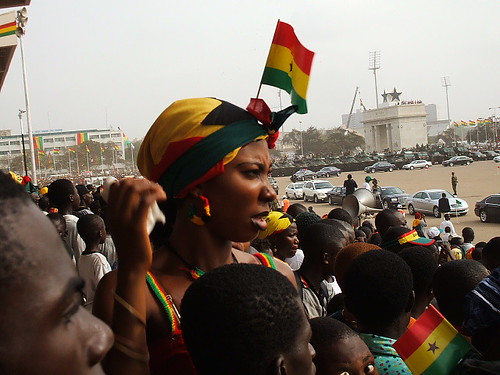 My Pen and My Paper gives a thumb-up to Ghana in the entry: “Giving it up for Ghana”

I hereby give Ghana my kudos and a big BOW!!! I never knew – now I know. On two occasions-3 and 2years ago, I had been to Kumasi in Ghana, to the KNUST, with the first two letters â€œKâ€ and â€Nâ€ referring to Kwame Nkrumah. I enjoyed my trips, took many pictures and made many friends for keeps. What attracts me to Ghana is the peaceful environment – its almost in the air, and everybody just walking peacefully, minding their own business, no wahala – compared to Lagos-state hustling-life-style. If Ghanaians were white, I would have said my observations had a reason, but considering they are as black as I am, some even blacker, I remember I wondered â€œwhat is the secret of this peopleâ€œ. To be entirely honest, there are a whole lot of things that Nigeria can learn from Ghanaâ€¦lesson#1 is: how to line up at a bus-stop. I was so surprised to see a tall man lined up behind a child at a bus-stop. The thought that crossed my mind was, if this could happen in Nigeria.

The Trials & Tribulations of a Freshly-Arrived Denizen…of Ghana doesn’t have much to say about Ghana’s Independence day, but shares a photo of the front cover of New African: Happy Birthday, Ghana!: You are Jubilee! 😉 Happy Jubilee!!! This is a cover of the latest edition of New African. The cover is, well, not surprising. It dedicates a good 45 pages, including the odd advert, but almost fifty anyway(!!) to Ghana!

On Tuesday Ghana kicked off 12 months of celebrations to mark its 50th year of independence. This milestone is especially noteworthy because Ghana was the first black nation in Africa to sever the Lilliputian chord of British colonialism in 1957. And since then it has been heralded as a beacon of stability and sustainable development on a dark continent plagued by corrupt governance, economic stagnation and civil strife.

Nevertheless, Ghanaâ€™s growing pains have been considerable. And most notable in this respect is the fact that – after cajoling the parliament to rubber stamp legislation to confer dictatorial powers and make him president for life â€“ Kwame Nkrumah, the socialist father of the nation, was ousted in a military coup in 1966. Although, given the way his name and likeness (as in the bronze statue pictured left) are revered in Ghana today, you’d be hard-pressed to find anyone there who thinks his ouster was justified.

Sociolingoâ€™s Africa blog shows to share links to some international news websites, and how they reported the event: “Ghana: Celebrates 50 years of independence”

Ghanaâ€™s 50th anniversary of independence on 6th March has generated quite a lot of comment from around the world. As to be expected heads of states converged on the Ghanaian capital Accra and reports abound.

It was not all merry. Abocco’s blog shares some salient points about the state of Ghana today: “Reliable electricity and energy at [email protected]”

I’ve talked to a lot of Ghanaians back home about the excitement regarding the celebration of Ghana’s golden jubilee. A lot of them have complained about the amount of money being spent to celebrate Ghana’s golden anniversary of independence when they do not have reliable power (electricity) and constantly have ‘lights off’. Ghana has outgrown the Akosombo dam and it cannot produce enough energy for its population. When I heard Obibini Takyi’s Akosombo Kanea on radio a week ago, I had found the perfect song for a blog entry about Ghana’s energy crisis, a topic I haven’t touched yet. What a perfect time to do that in the midst of the Ghana government’s promise to give its resident citizens uninterrupted power supply for almost two weeks to commemorate Ghana’s 50th anniversary of independence?

We conclude this round-up, with “An overview of [email protected]”, as written by the blog thepeoplesvoice.org

Momentous, festive and the pinnacle of Ghana’s Independence celebrations is March 6 and a delightful President John Agyekum Kufuor has asked the citizenry to give thanks to God for how far he has brought the nation. Giving to Caesar what belonged to Caesar, he gave the political outline of Ghana’s independence and lauded the first President of Ghana, Osagyefo Dr Kwame Nkrumah and his colleagues from the United Gold Coast Convention who, in 1947 launched the last phase of the process towards independence.