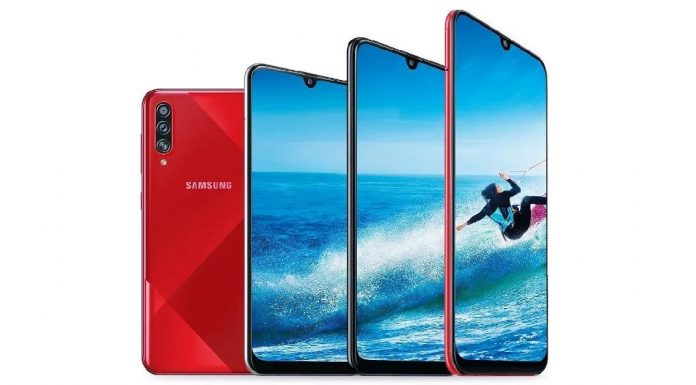 Samsung has officially announced the Galaxy A70s. Like the other Galaxy A series successors, it also features few upgrades over the predecessor.

Galaxy A70scomes with a massive AMOLED display, a 64MP camera, 6GB or 8GB of RAM and support for 25W fast charging technology. These are the highlights of the device.

The display is a 6.7-inch AMOLED Infinity-U display which indicates the notch is still existent on the front and comes in a 20:9 aspect ratio. The screen has a Full HD+ resolution of 1080 x 2400 pixels which is baked in with a fingerprint scanner.

Under the hood is a Snapdragon 675 chipset paired with either 6GB or 8GB of RAM with a 128GB expandable internal storage via microSD.

Similar to the Galaxy A10s, A30s, and A50s, this phone also ships with Android 9.0 Pie out of the box with OneUI splashed on top of it. The whole system is powered by a 4500 mAh battery which supports 25W fast charging.

For photos, the Galaxy A70s is equipped with a triple camera system on the rear composed of Samsung’s 64-megapixel (f/1.8) primary camera sensor, a 123-degrees ultrawide 8MP sensor, and a 5MP depth sensor. For selfies, the phone has a 32MP snapper with an f/2.0 aperture.

The phone comes with either 6GB or 8GB of RAM paired with 128GB of internal storage. The base variant was launched at a price of around $411 in India, while the upper 8GB/128GB memory option is priced at about $440