LinkedIn announced that it is adding voice messaging to its social network. Users can now communicate with contacts by recording and sending voice messages of up to a minute long.

According to LinkedIn, the function has been developed to help people communicate more quickly and easily, as rather than writing out a long text, they can simply record their voice, whether for giving an in-depth explanation or responding while multitasking, for example. The voice message system could also be used instead of traditional phone calls, which can be more intrusive since users can listen to messages and reply at their convenience.

In a blog post announcing the feature, LinkedIn asked its users, “Have you ever typed out a long message and thought about how much faster and easier it would be to say it out loud?” It then added, “To give you more ways to have conversations, we’ve now added the ability to record and send voice messages up to one minute in LinkedIn Messaging.”

We’re pretty sure no one has ever asked for such a feature from LinkedIn. But it’s here now. And we’re going to tell you how it works – just in case you should ever find yourself using the LinkedIn app and suddenly get the itch to send your connections a voice message. 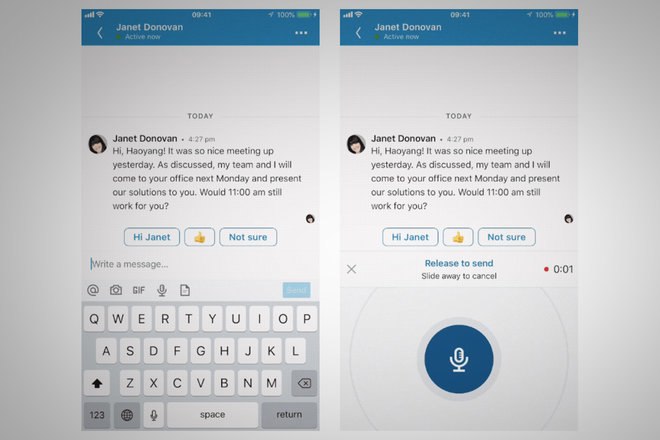 The voice messaging is rolling out within the LinkedIn app on Android and iOS. Voice messages can also be received on mobile devices as well as on the Web. Furthermore, the feature will be rolled out globally in the coming weeks.