The awards come after IBM Ghana’s demonstrative achievements in becoming a leading supplier of private and hybrid cloud and other technology solutions and services to customers in the Financial, Government and Telecommunications sectors in Ghana and West Africa.

As a former recipient of the same award in 2016 from GITTA, IBM Ghana under the leadership of Angela Kyerematen-Jimoh has continued to champion excellent delivery of high-value solutions and services to meet the growing needs of clients. 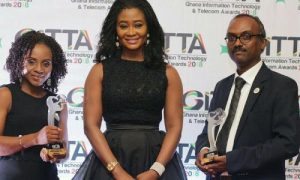 The ceremony which was graced with the presence of Hon Ursula Owusu, Minister of Communications and leaders in the ICT Industry, had the CEO of IBM Ghana, Angela Kyerematen-Jimoh picking up the most coveted personality award dubbed the Woman in Technology of the Year Award for 2018.

We are glad to be recognised in an area which is very key to your growth strategy.” She further commented on her personal award stating that it’s an honour to be recognised as the Woman in Technology especially so after taking a bold step from Banking into Technology.

The GITTA Awards which has become one of the industry’s most prized honours has an independent panel of industry experts as judges, which recognise organisational performances, products, services, innovations, executives and management teams, women in ICT, and CSR initiatives.

Over the years, besides promoting excellence in the telecom sector, GITTA has evolved and extended its reach to include companies which have taken efforts to innovate its business through the adoption of technology.

8th GITTA 2017, which has an independent panel of industry experts as judges, will recognize organisational performances, products, services, innovations, executives and management teams, women in ICT, and CSR initiatives.