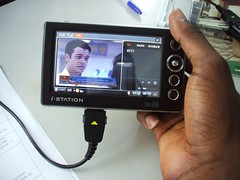 A terrestrial digital mobile TV service has been launched in Accra Ghana, named BlackStar TV. According to the operators, this is the first implementation of the T-DMB technology on the African continent.

Digital Multimedia Broadcasting (DMB) is a digital radio transmission system for sending multimedia (radio, TV, and datacasting) to mobile devices such as mobile phones. This technology was first developed in South Korea under the national IT project and the world’s first official DMB broadcast started in South Korea in 2005, although trials were available much earlier. It can operate via satellite (S-DMB) or terrestrial (T-DMB) transmission. DMB is based on the Eureka 147 Digital Audio Broadcasting (DAB) standard, and has some similarities with the main competing mobile TV standard, DVB-H.

Blackstar TV is currently running on test transmission here in Accra and is being offered in collaboration with Onetouch (a GSM cellular network). I was at the Ghana Telecom head office premises last Friday, to see a live demo of the devices. The quality on the little screens is just watch can be expected from a mobile device and no where near an analog mobile TV device.

Only one TV channel is currently active. It’s operators hope to broadcast 6 TV, 4 audio and 2 data channels when the service commences in full.
I’d do an extensive write-up on this issue on Mobile Africa, and link to it from here later.